Glenn Greenwald: “The Deceptive Debate Over What Causes Terrorism Against the West”

MDI Comment: Glenn Greenwald wades into the debate on the causes of terrorism with citations of academics, political analysts and former members of the intelligence services. Glen highlights how politicians deflect the debate away from Western foreign policy, and instead blame ‘ideology’ as the cause for terrorism to absolve themselves of blame for the instability and resentment in the world causes by their military operations. 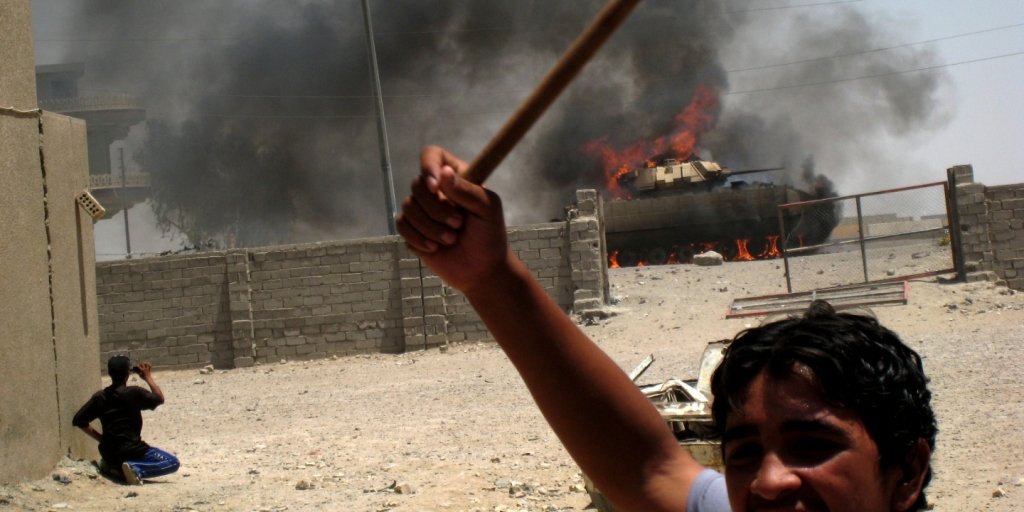 Ever since members of the U.K. Labour Party in September elected Jeremy Corbyn as party leader by a landslide, British political and media elites have acted as though their stately manors have been invaded by hordes of gauche, marauding serfs. They have waged a relentless and undisguised war to undermine Corbyn in every way possible, and that includes — first and foremost — the Blairite wing of his party, who have viciously maligned him in ways they would never dare for David Cameron and his Tory followers.

In one sense, that’s all conventional politics: Establishment guardians never appreciate having their position and entitlements threatened by insurgents, and they are thus uniting — Tory and Labour mavens alike — to banish the lowly intruders from their Oxbridge court (class and caste loyalty often outweighs supposed ideological differences). Corbyn’s reaction to all of this is also conventional politics: He quite reasonably wants to replace his Blairite shadow ministers who have been vilifying him as a Terrorist-loving extremist with those who are supportive of his agenda, a perfectly rational response that the British media is treating as proof thathe’s a cultish Stalinist tyrant (even though Blairites, when they controlled the party, threatened to de-select left-wing MPs who failed to prove sufficient loyalty to Prime Minister Blair). In response to thedismissal of a couple of anti-Corbyn ministers yesterday, several other Labour MPs have announced their protest-resignations with the gestures of melodrama and martyrdom at which banal British politicians excel.

Rather than wallow in all that internal power jockeying of a former world power, I want to focus instead on one specific argument that has arisen as part of Corbyn’s cabinet “re-shuffling” because it has application far beyond Her Majesty’s realm. One of the shadow ministers replaced yesterday by Corbyn is a total mediocrity and non-entity named Pat McFadden. He claims (plausibly enough) that he was replaced by Corbyn because of remarks he made in the House of Commons after the Paris attack, which the British media and public widely viewed as disparaging Corbyn as a terrorist apologist for recognizing the role played by Western foreign policy in terror attacks. (Can you fathom the audacity of a Party leader not wanting ministers who malign him as an ISIS apologist?)

I agree with everything @patmcfaddenmp said in these comments. Shocked if this why he’s been sacked. pic.twitter.com/PabO2xeLTZ

This claim — like the two ousted shadow ministers themselves — is so commonplace as to be a cliché. One hears this all the time from self-defending jingoistic Westerners who insist that their tribe in no way plays any causal role in what it calls terrorist violence. They insist that those who posit a causal link between endless Western violence in the Muslim world and return violence aimed at the West are “infantilizing the terrorists and treating them like children” by suggesting that terrorists lack autonomy and the capacity for choice, and are forced by the West to engage in terrorism. They bizarrely claim — as McFadden did before being fired — that to recognize this causal link is to deny that terrorists have agency and to instead believe that their actions are controlled by the West. One hears this claim constantly.

The claim is absurd: a total reversal of reality and a deliberate distortion of the argument. That some Muslims attack the West in retaliation for Western violence (and external imposition of tyranny) aimed at Muslims is so well-established that it’s barely debatable. Even the 2004 task force report commissioned by the Rumsfeld Pentagon on the causes of terrorism decisively concluded this was the case:

Beyond such studies, those who have sought to bring violence to Western cities have made explicitly clear that they were doing so out of fury and a sense of helplessness over Western violence that continuously kills innocent Muslims. “The drone hits in Afghanistan and Iraq, they don’t see children, they don’t see anybody. They kill women, children, they kill everybody,” Faisal Shahzad, the attempted Times Square bomber, told his sentencing judge when she expressed bafflement over how he could try to kill innocent people. And then there’s just common sense about human nature: If you spend years bombing, invading, occupying, and imposing tyranny on other people, some of them will want to bring violence back to you.

There’s a reason the U.S. and NATO countries are the targets of this type of violence but South Korea, Brazil, and Mexico are not. Terrorists don’t place pieces of paper with the names of the world’s countries in a hat and then randomly pick one out and attack that one. Only pure self-delusion could lead one to assert that Spain’s and the U.K.’s participation in the 2003 invasion of Iraq played no causal role in the 2004 train bombing in Madrid and 2005 bombing in London. Even British intelligence officialsacknowledge that link. Gen. David Petraeus frequently described how U.S. policies — such as Guantanamo and torture — were key factors in how Muslims become radicalized against the U.S. In June, Tony Blair’s former deputy prime minister, John Prescott, made this as clear as it can be made when he admitted the Iraq War was “wrong”:

When I hear people talking about how people are radicalized, young Muslims. I’ll tell you how they are radicalized. Every time they watch the television where their families are worried, their kids are being killed or murdered and rockets, you know, firing on all these people, that’s what radicalizes them.

Can that be any clearer?

Obviously, none of this is to say that Western interference in that part of the world is the only cause of anti-Western “terrorism,” nor is it to say that it’s the principal cause in every case, nor is to deny that religious extremism plays some role. Most people need some type of fervor to be willing to risk their lives and kill other people: It can be nationalism, xenophobia, societal pressures, hatred of religion, or religious convictions. But typically, such dogmatic fervor is necessary but not sufficient to commit such violence; one still needs a cause for the targets one selects.

In its statement claiming responsibility for the attack on Paris, ISIS invoked multiple ostensibly religious justifications for the violence but also said the targeting of the French was due to “their war against Islam in France and their strikes against Muslims in the lands of the Caliphate with their jets” (France had been bombing ISIS in Iraq since January 2015 and in Syria since September). In the same month, ISIS claimed responsibility for an attack on a Russian jet as retaliation for Russian airstrikes in Syria, as well as an attack on Lebanon as a response to Hezbollah’s violence. Here’s beloved-by-the-D.C.-establishment Will McCants of the Brookings Institution tellingVox why ISIS attacked Paris:

Even in those cases where religious extremism rather than anger over Western violence seems to be the primary cause — such as the Charlie Hebdo murders, done to avenge what the attackers regarded as blasphemous cartoons — the evidence is clear that the attackers were radicalized by indignation over U.S. atrocities in Iraq, including at Abu Ghraib. Pointing out that Western violence is a key causal factor in anti-Western terrorism is not to say it is the only cause.

But whatever one’s views are on that causal question, it’s a total mischaracterization to claim that those who recognize a causal connection are denying that terrorists have autonomy or choice. To the contrary, the argument is that they are engaged in a decision-making process — a very expected and predictable one — whereby they conclude that violence against the West is justified as a result of Western violence against predominantly Muslim countries. To believe that is not to deny that terrorists possess agency; it’s to attribute agency to them.

The whole point of the argument is that they are not forced or compelled or acting out of reflex; the point is that they have decided that the only valid and effective response to Western attacks on and interference in Muslim societies is to attack back. When asked by a friend about the prospect of “peaceful protest” against U.S. violence and interference in Muslim countries, Shahzad, the would-be Times Square bomber,replied: “Can you tell me a way to save the oppressed? And a way to fight back when rockets are fired at us and Muslim blood flows?”

One can, needless to say, object to the validity of that reasoning. But one cannot deny that the decision to engage in this violence is the reasoning process in action.

By pointing out the causal connection between U.S. violence and the decision to bring violence to the West, one is not denying that the attackers lack agency, nor is one claiming they are “forced” by the West to do this, nor is one “infantilizing” them. To recognize this causation is to do exactly the opposite: to point out that some human beings will decide — using their rational and reasoning faculties and adult decision-making capabilities — that violence is justified and even necessary against those who continually impose violence and aggression on others (and, for the logically impaired, see the update here on explaining — yet again — that causation is not the same as justification).

It’s understandable that self-loving tribalistic Westerners want to completely absolve themselves and their own violent societies of having any role in the terrorist violence they love to denounce. That’s the nature of the tribalistic instinct in humans: My tribe is not at fault; it’s the other tribe to which we’re superior that is to blame. But blatantly distorting the debate this way — by ludicrously depicting recognition of this decision-making process and causal chain as a denial of agency or autonomy — is not an acceptable (or effective) way to achieve that.

Article photo: An Iraqi youth reacts to a U.S. military Bradley fighting vehicle on fire in southeast Baghdad, Iraq, after it was struck by a roadside bomb, according to eyewitnesses. July 2, 20007.