Sadat Anwar, of the Muslim Debate Initiative, will be having a debate with Pastor Adrian Davis of the Church of God International, Canada, at 7:30pm on Wednesday 6th December 2017, at the Sandman Signature Hotel, Mississauga, Ontario, Canada.

The topic will discuss the ‘taqiyyah argument’, often used against Muslims, that Muslims are permitted in Islam to use ‘Taqiyah’ to lie about their religion in order to convert people to it, or to deceive non-Muslims. As such, the topic makes this debate the first of its kind, and an important one which is relevant to assessing the veracity of an often-used claim against Muslims.

Do Christians and Muslims worship the same God? When it comes to the subject of lying, what does the Qur’an teach? What does the Bible teach? Come and hear a rigorous and unrestricted discussion between a Christian Minister and a professional Muslim debater as they give answers to these and other questions in a professionally moderated interfaith dialog.

Mr. Sadat Anwar: Allah does not permit lying and is the God of the Bible.

Mr. Adrian Davis: – Allah permits lying and is not the God of the Bible.

The event is free, but requires registration – please register here. 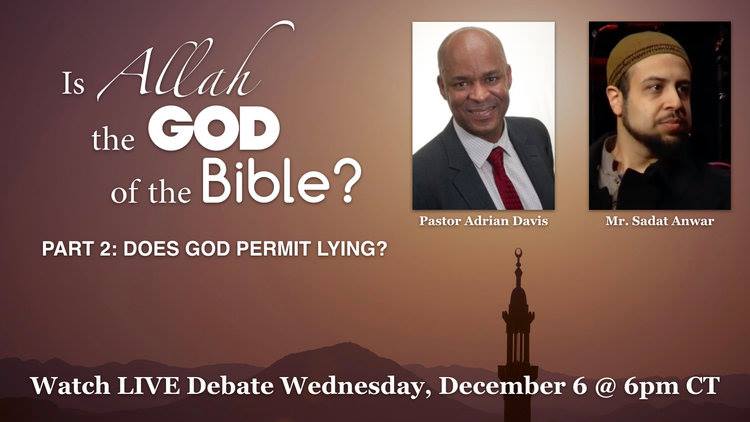