Book Recommendation: The Orthodox Corruption of Scripture: The Effect of Early Christological Controversies on the Text of the New Testament

The Orthodox Corruption of Scripture: The Effect of Early Christological Controversies on the Text of the New Testament 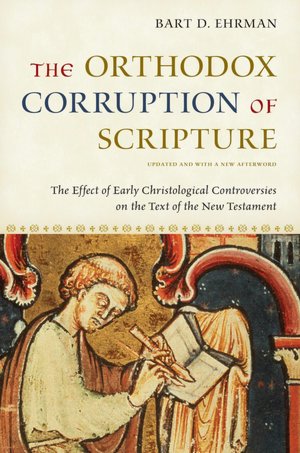 I have read this excellent book, and though it is definitely not aimed at the average lay reader it is well worth reading if you want an advanced introduction to how and why the Biblical text has been corrupted by Christian scribes.

The victors not only write the history, they also reproduce the texts. In a study that explores the close relationship between the social history of early Christianity and the textual tradition of the emerging New Testament, Ehrman examines how early struggles between Christian “heresy” and “orthodoxy” affected the transmission of the documents over which, in part, the debates were waged. His thesis is that proto-orthodox scribes of the second and third centuries occasionally altered their sacred texts for polemical reasons–for example, to oppose adoptionists like the Ebionites, who claimed that Christ was a man but not God, or docetists like Marcion, who claimed that he was God but not a man, or Gnostics like the Ptolemaeans, who claimed that he was two beings, one divine and one human. Ehrman’s analysis makes a significant contribution to our understanding of the social and intellectual history of early Christianity and raises intriguing questions about the relationship of readers to their texts, especially in an age when scribes could transform the documents they reproduced to make them say what they were already thought to mean, effecting thereby the orthodox corruption of Scripture.

“This detailed, carefully argued, and thoroughly documented study should be purchased for collections serving faculty and graduate students in New Testament studies and church history.”–Choice

“Ehrman’s arguments throughout deserve our attention; they are frequently compelling….Clearly set out and persuasively presented….Variants that treat of Christ’s person and function must from now on always be considered with reference to Ehrman’s thesis.”–Novum Testamentum

“This book is highly recommended as an excellent work of scholarship that is of great importance in the development of New Testament studies. Here is a new voice that addresses some of the central theological and historical issues.”-Journal of Theological Studies

“Bart D. Ehrman has written a book which will stimulate the casual reader and intrigue the academic or professional reader of the New Testament….An excellent work and definitely invaluable for lay or scholars.”–Anglican Theological Review