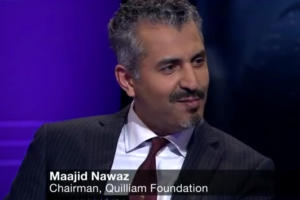 Maajid Nawaz, the BBC and the UK Muslim Community (part 1)

On the 24th and 25th March 2014, the BBC hosting Maajid Nawaz on two of its shows, BBC 1’s Newsnight and BBC 3’s Free Speech to speak about Muslim community affairs (yet again). This is not the first time the BBC has hosted Maajid Nawaz in such frequency, […]

Article taken from iSiyasah  Note: In light of the ongoing NSA spying revelations by Edward Snowden, the Guardian, and journalist Glen Greenwald, we present an online reprint of an amazing article (first published in Crescent International in 1997) which details the foundations of the western and secular ideological […]

Sharia vs Secular Democracy – which is more tolerant? The debate video!

Salam alaikum brothers and sisters, the debate video of yesterdays explosive debate on sharia law vs secular democracy, is now up! Watch and see what happened during my debate with a leading member of nottingham’s agnostic humanist and secular society. After the debate, a vote was taken, and […]

Demos Quarterly, Lead Essay, 17 January 2014 For the past generation a combination of economic and social liberalism has been intellectually and politically dominant. But, argues David Goodhart, something is stirring across party lines that wants to build on what is best in the two liberalisms while also attending […]

Hobbes’ Folly: The Creation of Secularism and a new Intolerance

Thomas Hobbes (1588 – 1679 AD) is renowned in Western history as being the father of modern Western Political Philosophy. His seminal book ‘Leviathan’ established the foundational ideas and concepts for what would later be called Secularism and Liberalism. Hobbes argues that the purpose of government is exclusively […]