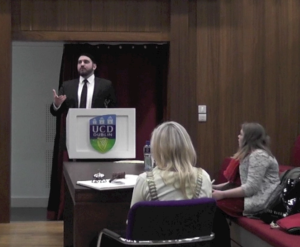 The video is now up, of the explosively entertaining debate between the highly vocal Irish feminist at a Dublin university, Rebak’ah Mckinney-Perry, and MDI’s Abdullah al Andalusi, on the topic ‘does Islam treat women right?’

Despite the debate being fierce and hotly contested, the audience vote at the end showed an overwhelming majority agreed that Islam did indeed treat women right! much to the consternation of the feminists who attended. interestingly, quite a few non Muslims agreed that Islam does indeed treat women right, and thanked Abdullah al Andalusi afterwards for showing them an interesting alternative to the assumed-to-be-superior western way.

We hope that you enjoy the video and find it intellectually stimulating as you find it entertaining. A review of some of the interesting points of the event can be read here.

The event featured a vote at the end, from the audience. After listening to both speakers, the audience overwhelmingly voted that Islam does indeed treat women right.

For our brothers and sisters of Pakistan, and other countries with restrictions on youtube, please use this link here.