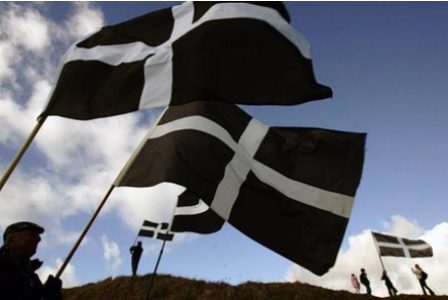 MDI Comment: Cornish fighters, demand freedom for Cornwall! “English out!” – This proves that terrorists and the causes for terrorism comes in a variety of shapes and forms… (..and no, the Cornish Liberation Army isn’t Muslim..).

· National Liberation Army threatens Stein and Oliver
· Anti-English rant must be taken seriously, say police
Steven Morris, The Guardian, Thursday 14 June 2007
There were few outward signs of a terrorism alert in north Cornwall yesterday. Visitors milled around Padstow’s busy harbour as usual while further down the coast at Newquay surfers lounged about on a warm, waveless day.But behind the scenes at Cornwall’s two most famous eateries, Rick Stein’s Seafood Restaurant in Padstow and Jamie Oliver’s Fifteen in Newquay, security was being stepped up after Cornish extremists claimed they were planning to target two of the country’s most famous chefs.A group calling itself the Cornish National Liberation Army (CNLA) threatened to burn down one of Stein’s businesses in Padstow and declared the cars of his customers legitimate targets.

The group said Fifteen – a restaurant set up by Oliver to help disadvantaged Cornish youngsters find a career in catering – was also in its sights, and branded the chef an “incomer” who was hurting local people by driving up house prices and living costs.

CNLA, which claimed to include members of the An Gof organisation – militants suspected of a series of attacks in the 1980s, including an explosion at a courthouse in St Austell, added it would target anyone who flew the flag of St George, which they called “imperialistic and tainted”.

It claimed one of its activists had previously been involved in the burning of English people’s holiday homes in Wales and said it had significant funding from other “Celtic nations” and the US.

The threats, made to a local morning newspaper via an Arabic web-hosting service, were being taken seriously by the police and the chefs. A police spokesman said yesterday: “Devon and Cornwall constabulary … have made immediate contact with proprietors of various businesses and are actively working together, with a view to ensure that appropriate crime prevention measures are maintained.”

There was outrage from across the political spectrum at the threats, a sense of disbelief from the businesses named and bemusement at the group’s targets.

Though he was born in Oxfordshire, Stein’s family has had connections with Cornwall for the best part of a century and his businesses have brought in millions of pounds to the economy.

Oliver’s Fifteen is a charitable foundation based at Watergate Bay – a hotel and extreme sports academy that has been operating in Cornwall for five generations. A spokeswoman for Fifteen said: “We are very surprised and disappointed by the statement because everything about us is Cornish. We are a fifth-generation Cornish business employing large numbers of Cornish staff, we buy huge quantities of food from Cornish fishermen and farmers and…we are committed to helping 400 disadvantaged young Cornish people over the next 20 years.”

A source at Fifteen said that she had recently been contacted by someone, possibly from CNLA, asking how many employees were born and bred in Cornwall. Police are investigating.

Stein, branded “this English newcomer” by the CNLA, declined to comment. But a spokeswoman said he had spent time in Padstow all his life and considered it home. He employs 244 staff.

The CNLA claimed it was a amalgamation of An Gof, which takes its name from a 15th-century rebel leader, and another group, the Cornish Liberation Army.

But police sources said they were unclear whether the threats were the work of cranks operating from a spare bedroom or something more serious. Earlier this year a message purporting to be from An Gof surfaced in which the group threatened to destroy all St George flags. A flag in Tresillian, south Cornwall, was subsequently cut to ribbons and the slogan “English Out” daubed on a garden wall.

The leader of Cornwall county council, David Whalley, said some of the CNLA’s concerns – such as the difficulty many locals have buying homes – were valid but their tactics were not. “It’s unfortunate these people feel so alienated,” he said.

Dick Cole, the leader of Mebyon Kernow, a political party that campaigns for greater self-government for Cornwall, said he was “very saddened” at the threats and called CNLA a “pseudo-terrorist group”.

Malcolm Bell, chief executive of South West Tourism, said: “A few years ago this lot would have been dismissed like Wolfie Smith and his Tooting Popular Front. Since 9/11 and the July 7 attacks you have to take it seriously.”

But there was some support on Cornish websites. On the Cornishman newspaper’s site, Michael Wright, an exile from St Austell, said: “The Cornish people are being cheated out of their own country. I wish I could do more for the liberation of Kernow [Cornwall].”

In its email, entitled “directive number one”, the CNLA echoed recent comments from Stein that local businesses had benefited from the “rosy glow” of publicity his ventures had attracted, the CNLA said one of its activists was involved in the burning of cottages in Wales and added: “At a unspecified date, Rick Stein will himself feel a ‘rosy glow’ in our Cornish port of Padstow.”

Backstory
Cornwall has a long history of rebellion. In 1497 an army of Cornishmen marched on London in protest against taxes levied by Henry VII to pay for a war against the Scots. They were defeated at the Battle of Deptford Bridge and the leaders, including the blacksmith Michael An Gof, were hung, drawn and quartered. In the 1980s a group calling itself An Gof, fighting for Cornish independence, claimed responsibility for a blast at a courthouse in St Austell, south Cornwall. They also said they were behind other incidents but some commentators believe they were simply claiming random crimes as their own. The Cornish National Liberation Army says it is coming-together of An Gof and the Cornish Liberation Army – a name that adorns many bridges in the area in graffiti demanding a “free Cornwall”.