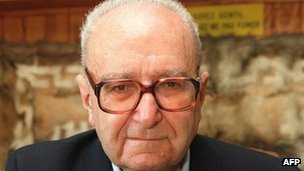 According to the BBC, French philosopher Roger Garaudy has died at the age of 98.

An ex-member of the communist party, he converted to Islam in the 1980s. He was quoted as saying that “The Christ of Paul is not the Jesus of the Bible”. In his 1996 book The Founding Myths of Israeli Politics he denied that the killing of Jews by the Nazis constituted genocide. As a Muslim he became a prominent commentator and supporter of the Palestinian cause.

During the war Garaudy joined the French Resistance and later wrote more than 50 books – mainly on political philosophy and Marxism.

After the war he served as a Communist deputy in the National Assembly and later the Senate, while becoming one of the party’s most prominent intellectuals. He also taught philosophy at the University of Clermont-Ferrand, where he fell out with another activist-philosopher, Michel Foucault, leading him to ask for a transfer to Poitiers. He was expelled from the French Communist Party in 1970 after criticising the Soviet invasion of Czechoslovakia.

Born into a Catholic family, he initially converted to Protestantism before rejoining the Catholic Church and eventually embracing Islam. Garaudy died in Chennevières, in the Marne valley east of Paris, at the age of 98.