This teaches us never to yield to social pressure 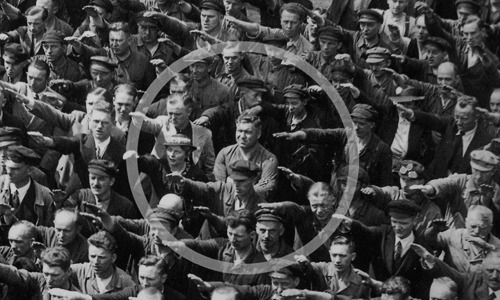 Picture of people giving a Nazi salute, with August Landmesser refusing to do so

August Landmesser (born May 24, 1910, presumably killed February 1944) was a worker at the Blohm + Voss shipyard in Hamburg, Germany, best known for his appearance in this photograph refusing to perform the Nazi salute at the launch of the naval training vessel Horst Wessel on 13 June 1936.  He had been a Nazi Party member from 1931 to 1935, but after fathering children with a Jewish woman, he had been found guilty of “dishonoring the race” under Nazi racial laws and had come to oppose Hitler’s regime.

August Landmesser became engaged in 1935 with the 1913-born Jewish woman, Irma Eckler. She was detained in 1938 by the Gestapo in the prison Fuhlsbüttel. The children, Ingrid and Irene, were separated; while Ingrid was allowed to live with her grandmother, Irene went first to an orphanage and later to the home of foster parents. Their father, August Landmesser, was discharged from prison on 19 January 1941. Landmesser worked as a foreman for the firm Püst, a haulage company. The firm had a branch at the Heinkel-Werke (factory) in Warnemünde. In February 1944 he was drafted into a penal unit, the 999th Fort Infantry Battalion, where he was declared missing in action and presumably killed.