Who ate the third loaf of bread?

A man once accompanied Jesus, saying to him “I want to be with you and be your companion.” They set forth and reached the bank of a river, where they sat down to eat. They had with them three loaves. They ate two loaves, and a third remained. Jesus then rose and went to the river to drink. When he returned, he did not find the third loaf, so he asked the man: “Who took the loaf?” “I don’t know,” the man replied.

Jesus set forth once more with the man, and he saw a doe with two of her young. Jesus called one of the two, and it came to him. Jesus then slaughtered it, roasted some of it, and ate with his companion. Then he said to the young deer, “Rise, by God’s leave.” The deer rose and left. Jesus then turned to his companion and said, “I ask you in the name of Him who showed you this miracle, who took the loaf?” “I don’t know,” the man replied.

The two of them then came to a body of water in a valley. Jesus took the man by the hand and they walked upon the water. When they had crossed over, Jesus said to him, “I ask you in the name of Him who showed you this miracle, who took the loaf?” “I don’t know,” the man replied.

They then came to a waterless desert and sat down upon the ground. Jesus began to gather some earth and sand, and then said, “Turn to gold, by God’s leaves,” and it did so. Jesus divided the gold into three portions and said, “A third for me, a third for you, and a third for whoever took the loaf.” The man said, “It was I who took the loaf.” Jesus said, “The gold is all yours.”

Jesus then left him. Two men came upon him in the desert with the gold, and wanted to rob and kill him. He said to them, “Let us divide it into three portions among us, and send one of you to town to buy us some food to eat.” One of them was sent off, and then said to himself, “Why should I divide the gold with those two? Rather, I shall poison the food and have all the gold to myself.” He went off and did so.

Meanwhile, the two who stayed behind said to each other, “Why should we give him a third of the gold? Instead, let us kill him when he returns and divide the money between the two of us.” When he returned, they killed him, ate the food, and died. The gold remained in the desert with the three men dead beside it. Jesus passed by, found them in that condition, and said to his companions, “This is the world. Beware of it.” [1]

– Excerpted from the book: The Muslim Jesus by Tarif Khalidi. 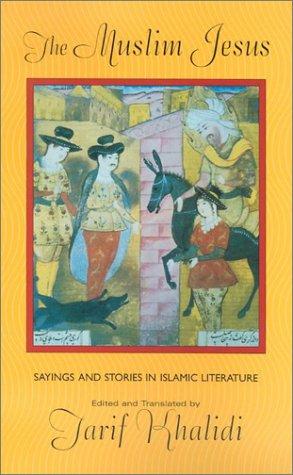 The story is seen as a moral fable of longstanding deep interest in many cultures, from late 9th century AD.

Reading the book, this particular story stood out to me. The main theme of the story is about greed and deceit and I saw it could relate to our times. It has much to say about the way we live, how we crave for worldly things. How easy it is to let our materialistic desires define our own character and actions. I find it concerning to see society like this, particularly the youth today, having the latest phone, jacket, expensive hair cuts etc. this is what defines most of them. And if they don’t have that then they have an identity crisis.

Looking at how people are so caught up in the world, gaining wealth and influence and ‘respectability’, one can understand why the Prophet Muhammad (pbuh) discouraged liking this life and this world too much. As we can read in the Qur’an, one of my favourite passages regarding worldly matters:

“The mutual rivalry for piling up (the good things of this world) diverts you (from the more serious things), Until ye visit the graves. But nay, ye soon shall know (the reality). Again, ye soon shall know! Nay, were ye to know with certainty of mind, (ye would beware!) Ye shall certainly see Hell-Fire! Again, ye shall see it with certainty of sight! Then, shall ye be questioned that Day about the joy (ye indulged in!).” [2]

The story may be a fable; one might question the authenticity of the story. However, I think one can spend his time more effectively by reflecting on the essence and deep meaning of the story.